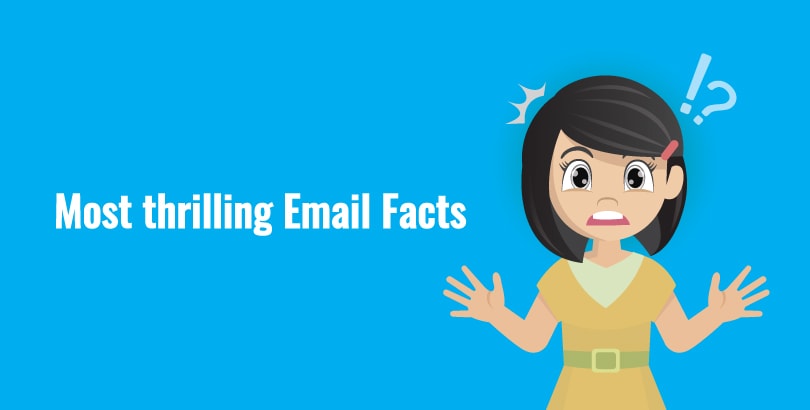 Let’s begin our Most thrilling Email Facts in 2020 guide now! There are many things that we label as boring, not guessing that their evolution and origin might hide interesting surprises. Email is among such things. Only a few people know when the first email was sent, however, do you know about it?

The first email, which was actually an “electronic mail,” was sent 50 years ago, and in present days, email is still one of the essential ways of communication for both personally & professionally, expressing itself in a firm and strong way.

There are some interesting facts about email, like why we include “@” in the names of the domain, how spam firstly appeared, and how it differs from email marketing. Do you know what all has the email gone through in recent years? Well, some astonishing things have happened, about which you might not know!

So, won’t you love to join us on the journey through time in order to see what email has actually gone through over its history of 50 years and provide yourself some trilling & interesting facts about email?

Some attractive articles worth your attention:

Some Email Facts That Might Snatch Your Sleep Tonight!

The journey is small yet full of thrill! Now let’s move towards the 20 most fascinating & interesting facts about email!

As per Internet Live Stats, 2,690,160 genuine emails are sent per one second, and that means over 200 billion every single day (hey, don’t fall down reading that!). That’s equal to 30 emails per person present on earth, every day.

Now, those numbers define comprehension, don’t they? Certainly, not everyone on the earth is sending 30 emails per day. Very less probably do! However, certain businesses send thousands of emails daily, and some folks have jobs that need a great amount of digital communication.

Well, email is no longer a young fellow! Raymond Samuel Tomlinson, an American programmer, was the first guy to the first personal email, almost 5 decades back (the year 1971). Tomlinson was sitting with another computer near to him, and he was the first receiver as well (no, he wasn’t chatting himself, he was just trying!).

Well, he didn’t send a hello or hi, though! According to Tomlinson, the first email looked like “QWERTYUIOP,” but he doesn’t remember it exactly! Undoubtedly, the first message was a huge leap for e-communication. It’s actually 23 years older than www (world wide web).

Roughly 80 percent of professionals exclaim that lead to new customer acquisition as well as highly help in retaining them. Email is old, but it is gold, and always will be! That’s why you see everybody is so greedy behind capturing your email, for example, by putting news letters on their websites!

Many folks quarrel upon this question. However, the fact is no matter on whichever side you are, you’re right! Tomlinson, the inventor of email, preferred the hyphened option. We went hilarious in one interview and said, “I’m just trying to preserve the world’s supply of hyphens. Besides that, the term has been used since long enough to drop the hyphen. It appears to be a losing war, however.” Google Trends proves that.

Raymond Tomlinson used the symbol @ by to indicate the specific host the email was delivered from. Actually, the @ symbol was stolen from payment documents, where it replaced a preposition “at,” and that’s what it means today also. @ enabled emails to outreach the recipient’s inbox, and the addresses just got a new look: [email protected]

Email Facts #6: When was the first email from the space delivered?

The first email was delivered from space on August 28, 1991 (of course it was an astronaut, not a tech-geek alien) Astronauts James S. Adamson and Shannon Lucid sent a message to Marcia Ivins (their colleague ), a shuttle chatter at the Johnson Space Center. That was the time when the movie Terminator 2 stormed the movie theaters.

Email Facts #7: Email is the best supporter of business communication

72 percent of the total businesses use email to agree that email is their primary way of communication. Are you thinking that these are emails simply going back-forth between the office? No, it’s not so.

It’s the outreaching scene where these businesses attain success regarding the expansion of their client base. However, clients often are going to get more info more regarding the businesses via an email, before making the actual purchase.

Email Facts #8: How did the word spam originate?

Till now, everything was pure and white, and then, one bad day, the word “SPAM” originated, which terrifies till the date today! The originating of this word is interesting. This term SPAM has been traced since the ’80s, where the word was used in online role-playing chat rooms known as MUDs, referring to any sort of abusive online behavior.

In those good & interesting old days, if you were abusing, you were spamming, but today, spamming is…no, you already know that, so no explanations from our side!

For your knowledge, the US is the top nation regarding generating spam, while China and Russia are on rank 2 and 3, respectively. If we talk about the per capita, then Belarus is the top nation to generate spam!

Email Facts #9: What’s the ultimate best day of the week to send an email?

Well, that’s a weird question, yeah? As per 10 email marketing studies, the best day of the week is Thursday to send important emails. Data from Wordstream and MailChimp recommend that Thursday, followed by Tuesday are the best days to send your professional or important emails. As a business person, there are max chances of getting subscribers (18%) on Thursday, followed by Tuesday with almost 17% chances.

Tuesdays get the maximum emails opened in contrast to any other day. However, Saturdays can also be a good day, when it comes to sending an email due to its high open rate, as per data from Experian, further analyzed by Customer.io.

Email Facts #10: What percent of people online use email, and what about total users?

As per Pew Research, the percentage of adults online using email is 92%, and exactly 61% of these folks use email on an average day. Over 3.9 billion email users are calculated worldwide.

Let’s have a halt and introduce you to an amazing tool!

Here we introduce you to the world’s most perfect email verifier! Don’t step behind from a free trial!

Email Facts #11: When was the email available for the public?

Yes, the first email was sent in 1971, as we mentioned in the paragraph above, but in 1973 the first email standard was proposed. In 1977, it achieved some modifications, which included the appearance of the “to” & “from” fields. The ability to forward emails to people who weren’t originally recipients also took place at that time.

As you’re familiar, modern email agents are so functionality-rich. For instance, Gmail emails come with over 30 useful features, and this number is elevating on a regular basis.

Email Facts #12: After 24 hours, the possibility of an email being opened is only and only 1%

Hard to trust, isn’t it? Emails have the best chance of getting opened within the very first hour of hitting your inbox. GetResponse reports state that over 21% of all messages are clicked open within one hour of sending. The open rate as an average drops 5% after 4 hours, and moving further, just 1 percent after 24 hours.

Email Facts #13: Why do Americans unsubscribe?

Well, there can be many factors that push you to unsubscribe email. For Americans, the biggest factor making them unsubscribe email is “I get too many emails in general,” and why not? Can we learn something here? If you’ve got a few subscribers now, then better, don’t irritate them by sending “a lot of ” stuff.

Email Facts #14: Graphics and subject lines are the keys!

The emails that have graphics attain a higher open rate and also a better click-through rate in comparison to any of the simple text-based emails. Want another tip? As per the reports of Invespcro, nearly 47% of the emails are opened, which are based on the subject line.

President Bill Clinton, over his eight years term, sent only two emails, and one of them was a test email. Unlike the predecessor, Barack Obama used emails pretty actively, and they helped him make over 690 million USD for his presidential campaign.

He exclaimed that everyone could win a lunch with the future president after donating $3. Obama and his team took their email campaign pretty seriously: they conducted several tests on their email’s subject line’s effectiveness and the same with the body and landing pages.

The GDPR is certainly more than just a reality for EU-based customers because privacy problems are more rampant than ever before. Most of the clients are glad to share info, but 88% of them desire to know how their information is used. GDPR is a quality barrier if we talk in simple words.

Yes, that’s the bitter truth! Just because email marketing is a solid and effective way, that doesn’t mean that all of us uses it responsibly. The highly reputed site – Statista shows that around 60% of all emails sent were spam in September month, 2017. While checking your spam folder, you certainly don’t have any issue believing that.

Tell honestly, were you familiar that 60% is actually a good decrease from the past some years? Talking about April 2014, this number touched 71%, making almost three fourth emails unsolicited spam.

On May 3, 1978, the world of the internet came across a rather unwelcome event, and it was the first-ever spam message. Gary Turk, a sharp-minded marketer at Digital Equipment Corporation, sent an evil campaign to 400 people, in which he promoted the mini-computer of a company. You’ll feel the shock to know; this event earned them a total $13 million profit.

Talking about the first commercial spam, the sending took place on April 12, 1994, and the sender was from an American law company. The recipient base was of 6,000 contacts. The motto of this campaign was to target the emigrants and promote the company of Martha Siegel and Lawrence Kanter. It offered assistance with getting green cards.

Email Facts #20: The fight against spam

The first email standard was introduced in 2005, that assured verification of senders and fight spam emails. That wasn’t an easy invention, though. It took 5 years to develop, followed by the increment of various anti-spam programs and recognizance standards targeted to avoid addresses. Later, we began to call it DKIM (Domain Keys Identified Mail).

Today, you’ve got various email filtering software, and a few of such software are cheaper than expectations.

Many email marketers found that using emoji in the subject lines highly increases open rates. An Experian report from 2012 exclaimed that 56% of companies putting an emoji in their subject lines encountered unique opens in comparison to those who didn’t put any emoji.

Certainly, that doesn’t mean you should stuff emojis in all of your emails every time. Forbes reports start that if you use emoji in work emails, it might decrease your colleagues’ opinions of you.

Some Email Facts That Might Snatch Your Sleep Tonight: The conclusion

So, those interesting facts about email were not just to entertain you, but there were some hidden marketing tricks as well that can work awesomely for you in case you implement them correctly! Now, you know from where this wonderful communicator started, and how it changed the world.

Now you can impress your beautiful colleague that sits beside you, by making her familiar with those Email facts! If you also know any of these, just hit our inbox, we will highly appreciate it.

This site uses Akismet to reduce spam. Learn how your comment data is processed.